ITR On the Go: Heck in a Kitty Carrier and Survivor Series is Big Again 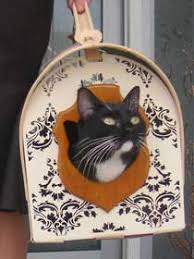 Alright. So nobody was expecting any bleeding, and “Heck in a Kitty Carrier” is taking it a bit far. Fine. On to the big picture.

Pay-per-views are weird things. Sometimes, a great one never really seems to get its due recognition (Wrestlemania 2 comes to mind). Other times, one gets embraced as being good, even though other people can’t really seem to understand why (pick any Spring Stampede you want). But, if you’ve ever wondered if it’s possible to put together a solid show, with good matches top-to-bottom, and accomplish nearly everything you needed to, without leaving people unsatisfied, yet still have the show be difficult to get through, congratulations! Hell in a Cell 2012 shows that is possible.

Let’s start with the little matches. All the matches were solid, even that Divas Division match. Kaitlyn really stood out as an improved wrestler, and Eve kept the belt–a move that seems for the best for now.

Team Friendship retained (as they should have) but did so in a way which helped advance and layer their own story. Yes, Sandow and Rhodes should absolutely have prominent places on every card given their talent levels. But they don’t necessarily need belts (not right this minute anyway), and can probably serve well as challengers for another month or so until the rest of the seemingly resurrected Tag Division finishes putting itself back together.

Kofi Kingston retained in an outcome which should have surprised nobody. Still, it was a solid match all the way through. Miz stripping Kingston’s boot off added a new element to a match we’d previously seen a thousand times before, yet the entire in-ring story didn’t run around forgetting everything that previously happened between these two. In the end, Kofi won the exact way he should have–I couldn’t have booked the end better if you’d asked me to–and both men are thankfully free from each other to move on to better things and fresher opponents.

The two unannounced matches were both good in their own right as well. Cesaro seems to finally have a legit angle going, and any time a second tag match gets on the card, and isn’t a botch fest, should be celebrated. Even the opening Orton-Del Rio match worked nicely for what it was.

Where this show should score high praise is that–for once–the show was all about the World Heavyweight and WWE Championships. First to the WHC, because it’s not the meat of the column.

Big Show and Sheamus may have put on the match of the night. Both men moved well, took turns at good times, and sold each other’s finishers well–which was key going in. It turns out that Big Show is actually a pretty compelling guy when he’s allowed to be an unstoppable force. Who’d have thought? (I did actually.) Meanwhile, Sheamus did some excellent post-match selling of the knockout punch’s ramifications, showing everybody that he’s more than just a dude who lifts with Triple-H and cuts terrible promos. He really surprised me there.

Before this goes to the meat of the show though, let’s talk about how this show could feel so heavy if it was so good. Just like I said last week, Hell in a Cell is an absolute Z-Level show in the world of pay-per-views. Watch these matches in isolation some other time and you’ll most likely realize that I’m right: If you had put on a show with this card, with this build, at Survivor Series in three weeks, we’d all be raving that this was one of the better shows of the year. Unfortunately, Hell in a Cell lacks all of the gravitas of one of the Big Four. Yes, even the now maligned-against-our-collective-will Survivor Series.

We, as fans or smarks, should take some key things out of this match.

First, CM Punk is an absolute top tier talent still. All the talk about him not being right for this, or being unable to hold up now that the pressure is squarely on him, should stop now. The man made Ryback a star last night in a way nearly every other member of that roster simply is not capable of. I won’t call it brilliance, but the man did everything he needed to do to not ruin Ryback’s momentum as a genuinely unstoppable force. He also protected both himself, and Ryback, which leads us to the point that…

Ryback proved that, while ring safety should still be a concern, he is absolutely able to be a star and is only unsafe because he’s green and full of steroids, not because he’s out to maim. If you put someone else in Ryback’s spot in that match, the crowd simply would not have gotten behind it as they did, especially that ending, which leads us to…

Praise for WWE Creative. It’s good to see that perhaps maybe, just maybe, there’s finally a sense of “bigger things” permeating their thinking process when it comes to the major feuds. There was a time as recently as a few years ago when this would have been a for sure title change. While part of that stems from a fundamental shift in show-to-show booking philosophy (which I’ve documented thoroughly elsewhere), I think this is much more a case of WWE finally realizing that they don’t need to treat each pay-per-view like a be-all-end-all show because…well…because not every pay-per-view is a be-all-end-all show. While there are times you need a definitive outcome in your main event–like in three weeks at the far more significant Survivor Series–sometimes it’s okay to just do something inconclusive to keep everybody’s momentum going until the show which means something.

That’s what WWE Creative did at Hell in a Cell, and they should be commended for it. Their ending allowed for everything they need heading into Survivor Series. Punk keeps his title for at least another 21 days, allowing him to pass Hogan’s 2nd longest reign. Ryback keeps his momentum despite taking the loss. Heyman’s abandonment of Punk at the end leaves the door open to more than one match possibility heading into Survivor Series. (No, not Punk versus Heyman in a singles match. Stop it.) Oh, and they did this all without the supposed money machine, John Cena.

The real story, the biggest story, from Hell in a Cell is that even with only three weeks of build and no matches announced yet, Survivor Series is starting to feel big again.

By God, I think they’ve got it…

– I’ve always believed it’s a complete miscarriage of common sense that Randy Savage isn’t in the WWE Hall of Fame yet. I also think it’s insane that Bruno Sammartino continues to refuse induction, in a move that baffles everyone, benefits no one, and serves no real purpose.

Those things being what they are, WWE is going to start needing to fill out its Hall of Fame list in the next few months so they can begin announcing the names beginning in January of 2013. For lack of a better way to put this, they’re going to need one of the really old timers. Now that that’s out of the way, a few names should jump to your mind.

Lou Thesz is an obvious omission from the Hall right now–and it would be easy to tie the induction in to the tenth anniversary of his passing–but he’s still dead at the end of the day and it’s not like his popularity is going to change drastically by 2014 or beyond. He’ll sit.

WWE has had a thing for AWA guys the past few years, but The Crusher has a lot of the same things going against him as Thesz. He’s dead (so he isn’t going anywhere). His popularity probably isn’t going up or down. And, he’s way more connected to the mid-west than to New York city.

After that, any number of a mishmash of different names probably came to mind possibly or not possibly including guys like Arn Anderson (as a singles competitor, not just a Horseman), Jackie Fargo, Baron Von Raschke, Playboy Buddy Rose, Jim Londos, and possibly even former Memphis Wrestling commentator Lance Russell.

But, if WWE is smart, they’ll go with one of their more glaring omissions and get a deal done to pub Backlund in the Hall this year. He just makes sense. He has a *real* Hall of Fame resume, he’s still alive, and he’s got a very deep career connection to this year’s HoF site: Madison Square Garden. Sure, Sammartino has an even stronger tie to MSG and Savage should be in before any of these other guys, but neither of them is going to happen. Make Backlund happen, Stamford!

– This past week, Hit the Ropes Radio polled both their listeners and available wrestling writers with the question of which two wrestlers would you choose right now if you were going to start a wrestling promotion. I limited myself to the United States and went with Aries and Castignoli/Cesaro. Some of the answers were ones I suspected would pop up somewhere along the line: Punk, Danielson,  Styles…even Cheerleader Melissa got a reference (how I can’t exactly explain). Then, I saw Cena’s name come up.

Look, I can’t yell at people forever about this, so if you really place a high value on Cena’s skill set, well…you’re insane but I can’t do anything about that. But why start a promotion with him? He’s got a ton of miles on him and he’s becoming injury prone. With an average at best skill set…I just don’t see why anybody would think he’s got that kind of upside.

– Not that the opportunity to discuss it ever comes up on the show, but I’m a huge hockey fan. It’s my favorite sport and the Chicago Blackhawks are by far the most important team in my sports pantheon. This blurb isn’t about the Blackhawks though, it’s about the Islanders.

This past week, the league announced that the Islanders will be moving from Uniondale–the heart of Long Island proper–to Brooklyn–a place hockey has never succeeded and hasn’t existed at a high level since the 1940’s.

For those unfamiliar with the league, this is by far the most pointless lateral move in history. Yes, nobody wanted to drive out to Uniondale or–God forbid–have to set foot in the decrepit Nassau Colosseum, but the Islanders will need to be better than the Rangers to get support in Brooklyn. That won’t happen. But hey, at least they’ll have achieved the Bettman dream of being second fiddle in a major sports arena.

– Criticism has been flying back and forth about Cam Newton–including accusations that the criticism is racially motivated. That’s silly.  He’s being criticized because he’s turning the ball over at critical times, can’t handle a post game press conference, and is throwing one-hop passes to wide open receivers when he isn’t under pressure.

This is all to say he’s a bad quarterback, hence the criticism. I do, however, agree that it isn’t fair to compare him to Vince Young. I’d say a comparison to either Ryan Leaf, Cade McNown, or Joey Harrington would be more accurate.

– As a massive college football geek, I was giddy that Utah came through to prove that Cal is only saved the fate of being the PAC-12’s worst team by virtue of Colorado being in the PAC-12. Also because I bet on Utah.

“Living in the Plastic Age” – The Buggles

Ray Bogusz is a co-host of the In The Room podcast on TheBradyHicks.com. This column can appear on your site by emailing intheroompodcast[at]gmail.com. You can follow Ray’s sardonic wrestling thoughts on Twitter via @RayITR and read his monthly column in The Color Commentator.